The Wesel-based specialty chemicals company ALTANA has made a sizeable donation in aid of the people who are suffering under the consequences of the flood disaster in parts of Germany. An appeal raised 30,000 euro.

The floodwaters, which inundated wide areas of southern and eastern Germany, have retreated. What’s left is mud, dirt and mountains of waste. Now the reconstruction starts: whole villages need to be drained, and in many places the electricity is still out.

To support those affected, the ALTANA Group in cooperation with Germany’s relief coalition Aktion Deutschland Hilft made an early appeal to its employees to donate money. The company doubled the amount raised and also made a one-off emergency contribution. Around 30,000 euro was raised in total which the company and staff have donated to the flood victims. “We want to play our part in helping in a rapid and non-bureaucratic way,” CEO of ALTANA AG, Dr. Matthias L. Wolfgruber, explains.

At the end of May and the start of June, rainfall was heavy in parts of Germany. The Danube and River Elbe burst their banks, dikes broke, and several villages had to be evacuated. Now that the floodwater has receded, the immense scale of the damage is clear. Experts estimate that public funds will not cover the financial need. “Thanks to the solidarity shown by our staff, we can help to drive reconstruction along quickly,” Wolfgruber adds. 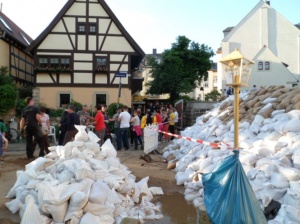 This press release is also available on www.altana.com/press

About ALTANA:
ALTANA develops and produces high-quality, innovative products in the specialty chemicals business. The ALTANA Group, with headquarters in Wesel/Germany, is a genuine “global player” with about 85% of its sales generated by international activities. The ALTANA Group has four divisions: BYK Additives & Instruments, ECKART Effect Pigments, ELANTAS Electrical Insulation, and ACTEGA Coatings & Sealants. All of these divisions occupy a leading position in their target markets with respect to quality, product solution expertise, innovation and service.

ALTANA offers innovative, environmentally compatible solutions with the matching specialty products for coating manufacturers, paint and plastics processors, the printing and cosmetic industries, and the electrical and electronics industry. The product range includes additives, special coatings and adhesives, effect pigments, sealants and compounds, impregnating resins and varnishes, and testing and measuring instruments. At present, the ALTANA Group has 42 production facilities and more than 50 service and research laboratories worldwide. Throughout the Group about 5,360 people work to ensure the success of ALTANA worldwide. In 2012, ALTANA achieved sales of more than 1.7 billion euros. Its impressive earning power and high growth rate make ALTANA one of the most successful and innovative chemical groups worldwide.