Do you have questions about our products or services? We are happy to help you.

2018 Results: ALTANA Remains on the Growth Path in an Increasingly Challenging Environment

Wesel/Düsseldorf, March 15, 2019 - In the 2018 fiscal year, the specialty chemicals company ALTANA remained on the growth path in a difficult market environment. Sales rose by 3 percent to €2,307 million. Adjusted for acquisition and exchange-rate effects, sales increased by 4 percent.

The 2018 fiscal year was characterized by varying dynamics. In the first half of the year, ALTANA continued its dynamic growth, which was accompanied by an appealing margin development despite rising raw materials prices. But in the second half of the year, the demand in important user markets, including the automotive industry, was significantly more subdued. At the same time, accelerated raw materials price increases led to high margin pressure.

Due to declining contribution margins, earnings before interest, taxes, depreciation and amortization (EBITDA) were down by 8 percent from the high level of the previous year to €431 million. At 18.7 percent, the EBITDA margin reached the target range of 18 to 20 percent again in 2018.

“Despite the challenging market environment, we achieved our ambitious sales targets. This shows that ALTANA is in a strong position with its consistent customer proximity as well as innovative products and technologies,” says Martin Babilas, CEO of ALTANA AG. “In order to ply a safe course even in troubled waters, we are continuing to make strong investments in the future. In doing so, we are focusing, in addition to research and development for our customers in our core business, increasingly on digitalization and new technologies.”

All divisions contribute to operating growth
The largest division, BYK, increased its sales by 3 percent to €1,066 million. Adjusted for acquisition and exchange-rate effects, sales were up by 4 percent.

With sales up by 4 percent (nominal and operating), the ELANTAS division achieved a sales volume of €507 million.

At ACTEGA, nominal sales grew by 3 percent to €353 million. Adjusted for acquisition and exchange-rate effects, the sales growth was twice as high (6 percent).

Asia provides strong impetus
The ALTANA Group’s regional sales distribution was balanced again in 2018. Europe accounted for 38 percent of sales, Asia for 33 percent, and the Americas for 27 percent. In 2018, Asia recorded once more the strongest sales growth. Nominal sales grew by 5 percent and operating sales growth was 6 percent. In China, the ALTANA Group’s largest single market in the region and its second-largest market in the world, nominal sales increased by 6 percent and operating sales by 5 percent.

In Europe, nominal sales were up 3 percent and, adjusted for acquisition and exchange-rate effects, 2 percent. On the American market, nominal sales remained the same as in the previous year, while operating sales showed a 3 percent increase. Nominal sales in the U.S., the ALTANA Group’s largest single market, remained at the same level as in the previous year. Adjusted for exchange-rate effects and acquisitions, sales were 2 percent higher.

Outlook:
The 2019 fiscal year is expected to remain challenging. ALTANA anticipates a weaker global economic performance. Sales volumes are thus expected to develop moderately, and operating sales growth should come in between one percent and 5 percent. The EBITDA margin should remain approximately on the level of the previous year and therefore within the strategic target range between 18 and 20 percent. However, sales and earnings development can be influenced by hard-to-predict exchange-rates changes and the further global economic development.

The press conference presentation, photo material, and the Corporate Report 2018 can be downloaded at www.altana.com.

About ALTANA:
ALTANA is a global leader in true specialty chemicals. The Group offers innovative, environmentally compatible solutions for coating manufacturers, paint and plastics processors, the printing and packaging industries, the cosmetics sector and the electrical and electronics industry. The product range includes additives, special coatings and adhesives, effect pigments, sealants and compounds, impregnating resins and varnishes, and testing and measuring instruments. ALTANA's four divisions, BYK, ECKART, ELANTAS, and ACTEGA, all occupy a leading position in their target markets with respect to quality, product solution expertise, innovation and service.

Headquartered in Wesel, Germany, the ALTANA Group has 47 production facilities and 60 service and research laboratories worldwide. Throughout the Group about 6,400 people work to ensure the worldwide success of ALTANA. In 2018, ALTANA achieved sales of €2.3 billion. About 7 percent of sales are invested in research and development every year. Its high earning power and high growth rate make ALTANA one of the most innovative, fastest growing, and profitable chemical companies in the world.

Key figures at a glance 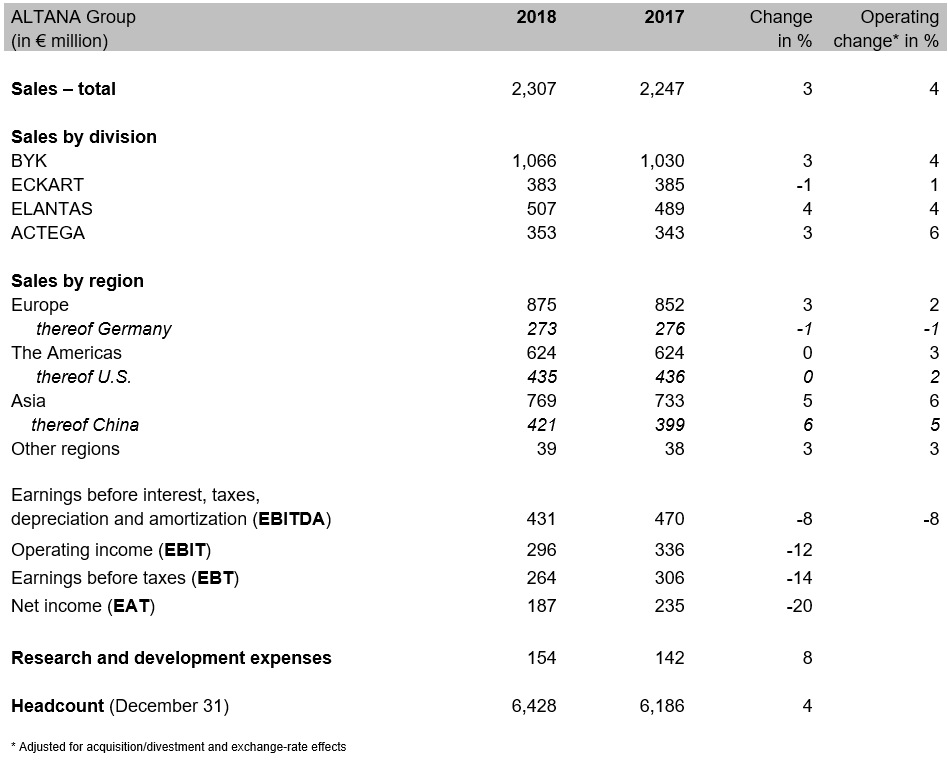